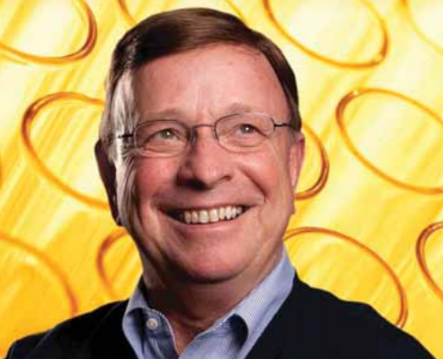 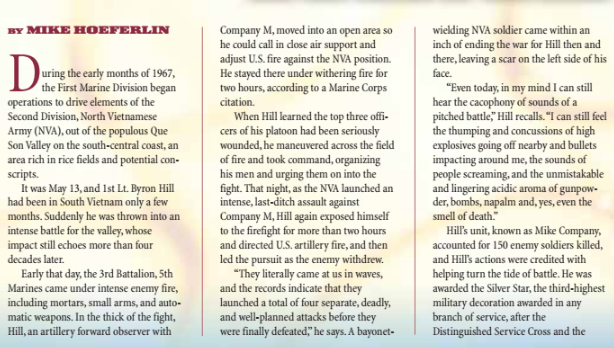 When Gerry asked me to speak tonight, he said he would like to hear about my experiences and what the Marine Corps means to me!

To set the stage, I would like to tell you about the Que Son in Viet Nam…the valley lies southwest of Danang and takes its name from a mountain range that surrounds it… Route 534 to the east is a direct route to the South China Sea and through a series of connecting valleys, the Que Son Valley is connected to the “Ho Chi Ming Trail” …

this valley was historically known as “The Rice Bowl” of Viet Nam. The NVA knew this and were dependent on the valley as a source of food for their soldiers….. for years the 2nd NVA Division literally owned the valley.

During this campaign, which lasted from April until November 1967, more then 900 Marines and Navy personnel and more than 6,000 VC and NVA perished in these battles. Five Marines and a Navy Chaplain were awarded the Congressional Medal of Honor for their heroic actions in the Que Son Valley that summer …all but one of these awards were awarded Posthumously!

When I arrived in Viet Nam in early 1967, I was assigned as a Forward Artillery Observer with the 3rd Battalion 5th Marines, and subsequently assigned to Company “M”.

During my 10 months with the Battalion, in addition to my primary assignment as an artillery FO, I served additional billets including as Platoon Commander of the 2nd Platoon Mike Company and as the Battalion Fire Support Coordinator with responsibility for employment of Air, Artillery and Naval Gunfire assets.

During this time, we encountered frequent, often daily engagements with the NVA…some were mere skirmishes, but others culminated in significant battles where each side stood their ground and literally fought to the death…during these engagements, I witnessed acts of unbelievable bravery and determination of Marines and the attached Navy personnel. Some had been wounded, often multiple times but fearlessly continued the fight.

While I vividly recall many brave acts, I would like to highlight a couple of them:

A Kid from Southern California

The “Point Marine” is tasked to lead the unit to its objective and to be the eyes and ears being alert for any signs of danger.

Swannie Walked “point” for Company M for months on end

When he reported this to his Squad Leader, he was told to shoot them if they moved again

His actions allowed the rest of the unit to take fighting positions, saving many lives

Born and raised in Birmingham AL, he was a career Marine

LT Tilley, was evacuated along with other wounded Marines from his Kilo Company

Captain McElroy refused evacuation and continued to lead the Company for the rest of that day and the next day.

During the day and early evening, we pounded them with Machine Gun, Artillery, Air and Naval Gunfire…

At dusk, we observed the enemy retreating and we organized our lines for a possible attack

Commencing precisely at midnight, we came under fierce frontal attacks as the NVA tried to overrun our position with repeated human waves apparently, they thought we were the most vulnerable… thanks to a determined bunch of Marines and supporting arms fire we repelled them

On May 11th, during Operation Union I, we were under a nighttime assault by waves of enemy attacks we had called artillery in very close, and it was literally landing in our laps

Sgt. Peters crawled to my position and begged me to bring the artillery even closer…as he was concerned for being overrun

On September 4th, during Operation Swift, again under an intense enemy assault, Sgt Peters was wounded on multiple occasions but continued to lead the men of his squad

Was revered by all Marines

He was always willing to sit and talk

He would give the Marine a cigarette

He was always with “His Marines”

Against regulations and direct orders, he would go on small unit actions armed only his Stole, a pocket-sized Bible and a pocketful of St Christopher Medals

When admonished by the Battalion Commander, his response was: “My Marines need me when they are wounded and dying”

On September 4th, once again against the orders of higher HQTRS, he jumped on a helicopter with the Marines of Mike Company as they launched on a mission during “Operation Swift”

Father Capodanno, 39 years young, was Killed in Action that day as he was serving last rites to dying Marines and a Navy Corpsman Doc

For conspicuous gallantry and intrepidity at the risk of his life above and beyond the call of duty as Chaplain of the 3d Battalion, in connection with operations against enemy forces. In response to reports that the 2d Platoon of M Company was in danger of being overrun by a massed enemy assaulting force, Lt. Capodanno left the relative safety of the company command post and ran through an open area raked with fire, directly to the beleaguered platoon. Disregarding the intense enemy small-arms, automatic-weapons, and mortar fire, he moved about the battlefield administering last rites to the dying and giving medical aid to the wounded. When an exploding mortar round inflicted painful multiple wounds to his arms and legs, and severed a portion of his right hand, he steadfastly refused all medical aid. Instead, he directed the corpsmen to help their wounded comrades and, with calm vigor, continued to move about the battlefield as he provided encouragement by voice and example to the valiant marines. Upon encountering a wounded corpsman in the direct line of fire of an enemy machine gunner positioned approximately 15 yards away, Lt. Capodanno rushed a daring attempt to aid and assist the mortally wounded corpsman. At that instant, only inches from his goal, he was struck down by a burst of machine gun fire. By his heroic conduct on the battlefield, and his inspiring example, Lt. Capodanno upheld the finest traditions of the U.S. Naval Service. He gallantly gave his life in the cause of freedom.

Father Capodanno, is now under consideration by the Vatican as a potential Saint of the church. His case for Sainthood has tremendous support from myself and many of the Marines with who he served!

How and Why do these men react the way they do under these circumstances is a question that I have often pondered … I don’t know the answer to this question, but I am proud to have known each of them and to have served with them! 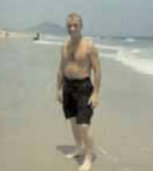 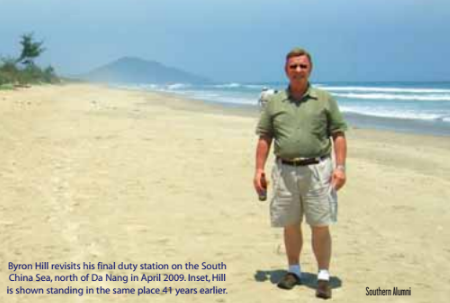 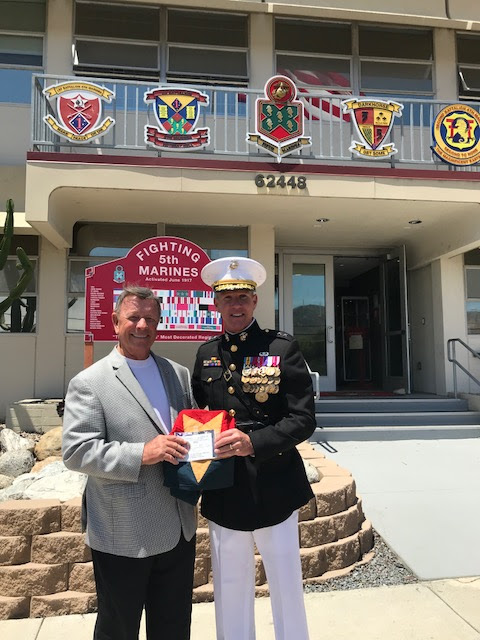 After the dedication of the Vietnam Wall in the 5th Marines Memorial Garden today I was able to speak with Lt Col John Gianopoulos, XO of the 5th Marines, specifically I asked him if the Regiment was interested in an artifact from Operation Union I. He was very receptive and I passed along the NVA flag that Colonel Esslinger had received from members of Mike Company on May 13th 1967 during Operation Union I.

Major General Eric Smith, CG of the 1st MarDiv agreed to accept the flag on behalf of the Regiment, so I was able to get a photo of him accepting the flag. They have a great display of artifacts, but interestingly enough, until today, nothing from Vietnam. The flag will now be displayed with the 5th Marines memorabilia from several wars dating back to 1917...WWI!
Byron Hill


The photos below are of John McCain and another Marine friend and Sarasota Military Officers Association Member, Byron Hill. Byron is just behind John McCain. 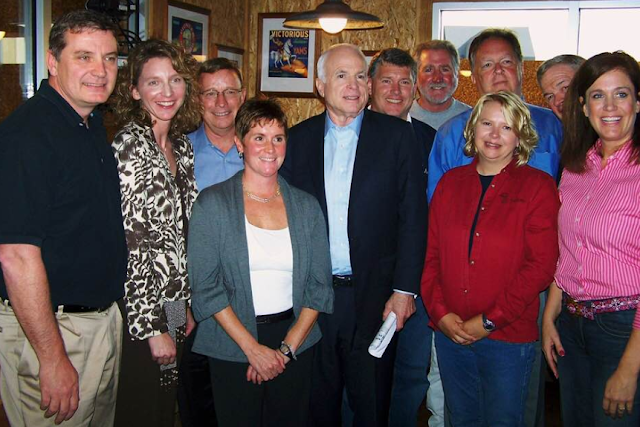 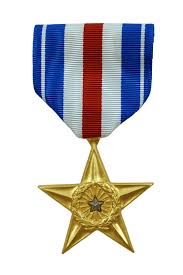 The President of the United States takes pleasure in presenting the Silver Star Medal to Byron Edward Hill (0-94785), First Lieutenant, U.S. Marine Corps, for conspicuous gallantry and intrepidity in action while serving as an Artillery Forward Observer with Company M, Third Battalion, Fifth Marines, First Marine Division in connection with operations against the enemy in the Republic of Vietnam. On 13 May 1967, during Operation Union, the defensive positions of Company M came under intense enemy small arms, automatic weapons and mortar fire. Unhesitatingly exposing himself to heavy enemy fire, First Lieutenant HILL maneuvered to an exposed vantage point to adjust artillery fire against the enemy's positions and remained in this unprotected position for over two hours, skillfully directing and adjusting supporting arms fire until the enemy fire was silenced. Upon learning that the platoon commander, platoon sergeant and guide of the Second Platoon had been seriously wounded, he assumed command of the unit and moved across 200 meters of fire swept terrain to the platoon's location. Demonstrating exceptional leadership and tactical ability, First Lieutenant HILL reorganized the unit, encouraged his men and aggressively led the platoon. Later in the afternoon, he was recalled to the command post where he immediately coordinated and supervised the planning of night defensive fires for the company's position. In the early morning hours 14 May 1967, the enemy launched an intense machine gun and mortar attack, closely followed by a coordinated infantry assault against the company's position. With complete disregard for his own safety, he moved to an exposed vantage point and for over two hours, calmly directed artillery fire on the hostile force, often within ninety meters of the company's lines. As the attack subsided, First Lieutenant HILL relentlessly pursued the fleeing enemy with intense supporting arms fire. In large measure due to his determined efforts and superior professional ability, Company M accounted for over 150 enemy confirmed killed. By his steadfast courage, exceptional professionalism and selfless devotion to duty, First Lieutenant HILL was an inspiration to all who served with him and upheld the highest traditions of the Marine Corps and of the United States Naval Service.
Home Town: Sparta, Illinois